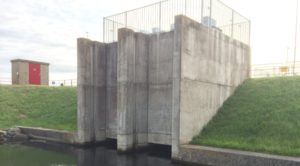 This project includes a VAWT turbine with the newest version of the bi-directional W2E Pitch Control in The Flushing. The turbine will be installed in 2021 and tested in 2022.

2019 VAWT at Port of Antwerp locks

The Port of Antwerp aims at more sustainable energy. In an extensive selection procedure the turbine of Water2Energy was selected and build in consortium with DeMeyer, a construction company in Belgium.

November 2018, the turbine was installed in one of the four drainage channels bypassing the Kallo locks. The channels dimensions are 5 meter in height and 2,5 meters width. The 150kW turbine was tested on performance and robustness.

We measured peak power of almost 200 kW which can even be increased!

After these successful tests similar channels at different locks can be equipped with turbines, with a potential of electricity production of 7 GWh per year……

A company operating in Cameroon contacted Water2Energy to develop a microturbine for supplying energy to rural communities. A prototype is tested and will be finalized. After the final touch the prototype will be shipped to Cameroon to serve as a pilot installation. 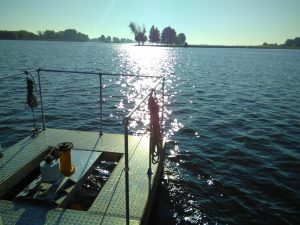 2015 Dragonfly II in the river Scheldt

Dragonfly II was tested with PRO-TIDE and De Vlaamse Waterweg NV (the river and channel authority of Belgium) from November 2014 till January 2015. This turbine was equipped with the pitch control invented by Water2Energy.  It was lifted above water by a simple rotating mechanism.  The addition of pitch control showed an increase of 30-50% of efficiency. 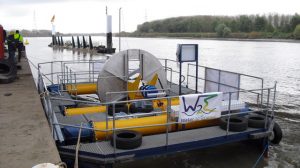 2013 Dragonfly I in the river Lek new Rotterdam

The first drawings originated from 2010. The baptising ceremony of the first D-version, called Dragonfly I, was in autumn 2012 at the Shipyard VSH in Heusden. The first tests were done in 2013 at the Lek next to Royal IHC with the standard Darrieus turbine. The turbine was lifted above water with a parallogram mechanism. In addition a preliminaire version of blade pitch control was tested and indicated further improvement of efficiencyes.